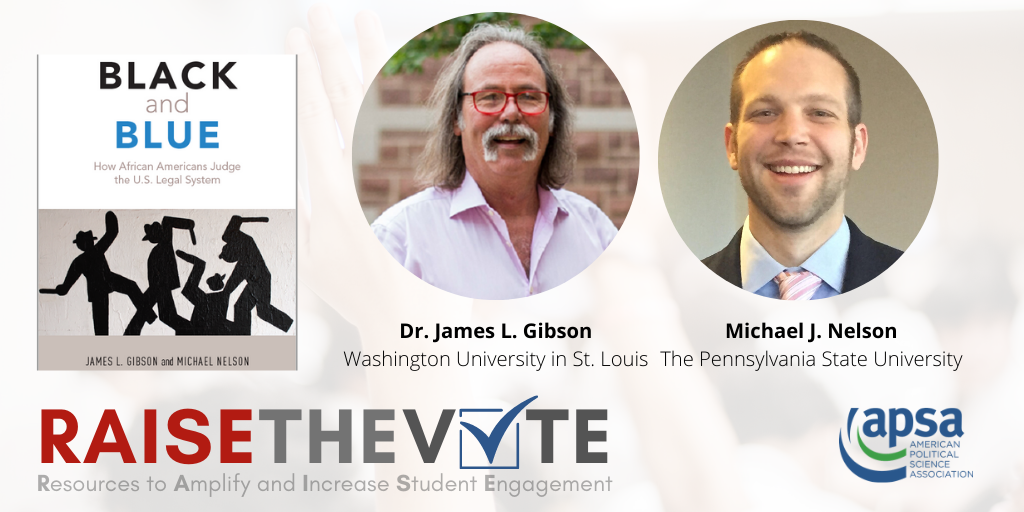 In 2018, we published Black and Blue: How African Americans Judge the U.S. Legal System (Oxford University Press). Based on a nationally representative survey of African Americans, this book presents one of the most comprehensive analyses ever of the attitudes of Black Americans toward the legal system. The most important finding of our investigation is that discriminatory and unfair interactions between African Americans and legal authorities have far broader and potentially more long-lasting consequences for whether Black Americans extend legitimacy to the country’s legal institutions than most imagine. The damage done to the legitimacy of legal institutions by these encounters will not easily be undone.

Relying on decades of work on the legitimacy of courts, but largely among White Americans, Black and Blue begins by identifying a substantial legitimacy gap between Black and White constituents when it comes to the authority of the U.S. Supreme Court. Because public opinion studies so infrequently have an adequate representative sample of African Americans, it is difficult to compare these findings to the past, but it appears that Black Americans, who once viewed the Supreme Court as their political friend and ally, have changed their perceptions.

Discriminatory and unfair interactions between African Americans and legal authorities have far broader and potentially more long-lasting consequences for whether Black Americans extend legitimacy to the country’s legal institutions than most imagine.

The heart of Black and Blue is an investigation of the consequences of maltreatment by legal authorities for Black Americans’ attitudes toward the law and courts. We learn that about four in ten of the African American respondents reported negative personal experiences with the police within the past five years. That such a large proportion of Black Americans evaluate their contacts with the police as discriminatory indicates just how toxic relationships between Black Americans and the police are.

At the same time, we hypothesize that group attachments might provide a means of linking attitudes toward local legal legitimacy and one’s willingness to ascribe legitimacy to the U.S. Supreme Court. Our data suggest that identities provide a sort of “glue” that binds various attitudes together. While we found, across African Americans as a whole, no evidence that beliefs that the local legal system is unfair to Black Americans have contaminated attitudes toward higher level legal institutions such as the U.S. Supreme Court, we did find an important relationship conditional on group attachments. Those African Americans with the strongest psychological connections to their group are the ones most likely to express attitudes toward local and national legal institutions that are strongly interconnected. Group attachments thus do indeed provide a glue that binds attitudes together. It is important to remember that this finding comes from a period that predates the Black Lives Matter movement.

Earlier research has shown that the symbols of law (e.g., judges’ robe) are associated with justice and fairness among White Americans, and that when exposed to these symbols, people are more likely to extend legitimacy to legal institutions—and this, even when those institutions are producing policies to which people object. Socialization and experiences among White Americans seem to leave a residue of positivity that is subsequently mobilized by legal symbols. In a nutshell, this has been described as a “to know them is to love them” effect, which means attentiveness of courts is associated with legitimacy and acquiescence owing to exposure to these legitimizing symbols.

Not so for African Americans. Indeed, Black and Blue may be the only instance discovered so far in which “to know them” is not associated with “loving them.” We think we understand how this process unfolds.

White Americans learn early that law is associated with justice and fairness. While not necessarily true of all White Americans, most receive reinforcement of this view through their experiences with the police (e.g., the helpful police officer who gives one directions, or even lets one off of a deserved traffic citation).

Black Americans, on the other hand, are often given “The Talk” at an early age. The content of the talk surely varies but the message is clear: the police are not your friends. This early socialization is also reinforced through encounters with the police (as was true for instance of several million young New Yorkers of color under the Bloomberg regime [1].These experiences leave a residue that associates law with social control, not justice. When exposed to the symbols of law (e.g., a judge’s gavel), these negative associations are activated. This, in turn, undermines judicial legitimacy. The insidious effects of maltreatment can therefore persist for a very long period of time and exert their influence via cognitive processes that are essentially automatic (what Kahneman would call “System 1” processes) and are therefore not necessarily subject to cognitive control.

As with many disputes in the past (e.g., the Ferguson, MO, protests) the symbols of legal authority (and control) can be seen everywhere today. These symbols exacerbate Black Americans’ negative feelings toward legal authority because they mobilize the residue of unfair treatment in times past.

Black and Blue leaves many stones unturned when it comes to understanding Black Americans’ attitudes toward the law. But the most important limitation of our research is that its data come from a time prior to the rapid development of Black group consciousness ignited by the Black Lives Matter movement. Based on the findings of the book and the level of group identity found at the time of our survey (in 2014), our extrapolation is that the legal system, from the top to the bottom, is indeed currently in crisis among African Americans, and that the psychological damage of so many horrible encounters with legal authorities will not soon abate.

James L. Gibson is the Sidney W. Souers Professor of Government in the Department of Political Science at Washington University in St. Louis.  He is also Professor Extraordinary in Political Science, and Fellow, Centre for Comparative and International Politics, Stellenbosch University (South Africa). Gibson’s research interests are in Law and Politics, Comparative Politics, and American Politics. He is currently working on an extensive research agenda investigating the legitimacy of institutions (especially courts, state and federal), the rise of political intolerance in the U.S. and in the world, and the role that courts have played in creating inequality in the U.S.