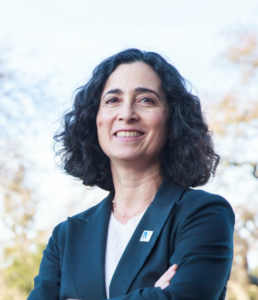 My Menlo College students are generally concerned with current events and politics at the federal level—including Supreme Court decisions and actions taken by Congress or the President—and it can be challenging to convince them that their participation matters on that larger stage. I have found that once students learn more about what local government does and how to get involved, local politics provide a great opportunity for turning hackneyed phrases about the importance of participation and voting into real-world experiences that have long-lasting impacts on their civic engagement. Last spring, a local political issue offered an opportunity for my students to learn about the political process while also taking direct action.

In March 2019, a city very close to campus, Redwood City, was threatened with a lawsuit if it did not revise its election procedures to switch from an at-large system to a district system. The basis for the threat was that only one of the seven members of the council was Latino, while Latinos represent 39% of the population. This dilution of the Latino vote was in violation of the California Voting Rights Act. The council put together some map options and was preparing to vote. It was time to have our voices heard.

It’s easy to spend our time talking about federal politics; it dominates the news cycle and can feel like where the important decisions are being made. But local politics are equally important and often more accessible.

First, I shared with my students what was happening, including background information on at-large vs. district elections, the demographics of Redwood City (52% non-Hispanic White), and the proposed maps. This was an academic lesson that included the history of the 1965 Voting Rights Act, the California Voting Rights Act, and the pros and cons of at-large vs. district systems. Then I gave them an assignment:

Imagine you are speaking to the Redwood City Council (or writing an op-ed for the local paper). In your own words but being as persuasive as possible, why should the city approve [your preferred map]?

Students wrote their statements and then shared them with the class. It was a satisfying and successful class that engaged students’ creativity while maintaining academic integrity.

Things shifted to real-world politics soon afterwards, when it looked like the council was going to approve a map that created only one majority-Latino district. Local residents were outraged. Groups representing the Latino and Asian American communities organized a rally to precede the March 25, 2019 council meeting. Several of my students met me there to participate in the rally and sit at the council meeting.

Inspired by the rally to have their voices heard, two of my students – Victor Garcia and Rasmia Shuman – decided to fill out cards to speak, and they read their prepared statements from our class assignment.

In the end, the council voted to change their decision and adopt a map creating two majority-minority Latino districts. This was the outcome preferred by my students, and they were invigorated by their role in the process. 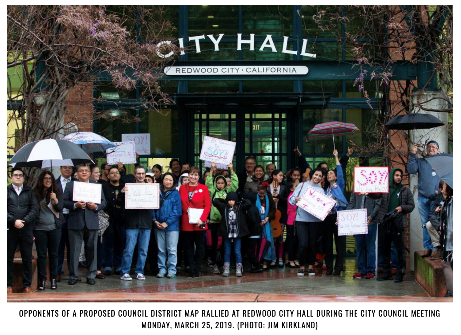 It’s easy to spend our time talking about federal politics; it dominates the news cycle and can feel like where the important decisions are being made. But local politics are equally important and often more accessible. The surge of interest in police reform is a good reminder that local politics can catalyze change, whether through police reform, redistricting decisions, or plans for how to bring students back to campus safely in the fall. My students learned a powerful lesson about how to participate locally and have their voices heard. As my colleague Dr. Emily Farris says, “local politics are the best politics.”

Melissa R. Michelson is Dean of the College of Arts & Sciences and Professor of Political Science at Menlo College.