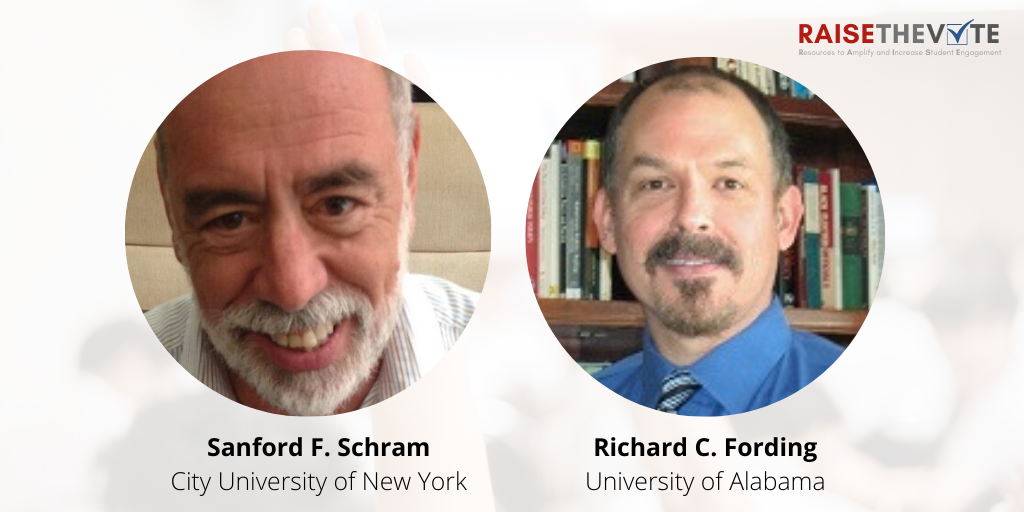 The year is 2020, not 1968. There has been extensive commentary about the protests over the recent murder of George Floyd by Minneapolis police suggesting parallels to the black insurgency of the late 1960s, including especially the massive number of riots that occurred in cities across the country in 1968. A number of historians have incisively pointed out differences as well. In particular, Tom Sugrue has noted the diversity of today’s protesters compared to the exclusively black composition of the 1968 rioters. It is true that outrage over police brutality directed primarily at African American men was similarly the spark that ignited many riots back then in addition to those that broke out with the assassination of Martin Luther King, Jr, in the spring of 1968. And today’s uprising represents the culmination of efforts by the #BlackLivesMatter movement that carried forward that legacy of resistance ever since the killing of Michael Brown in Ferguson, Missouri by policeman Darren Wilson in 2014 had re-ignited the smoldering flames of frustration with the persistence of racialized policing in America. Yet, the largely Black protesters of #BlackLivesMatter have now been joined by a diverse set of allies who for a variety of reasons support that resistance. The racial diversity of the protesters is noteworthy for many reasons, but not the least of which is that it is in all likelihood connected to the growing racial liberalism among White Americans, as reflected in surveys indicating decreased hostility toward outgroups, including Muslims and Latinos, as well as African Americans. For instance, there is good reason to think that the Blue Wave that washed over the 2018 midterm elections, netting a 40-seat gain and enabling Democrats to take back the House of Representatives, was also a multi-racial coalition of racial liberals, who we believe could spearhead a Democratic victory to take back the Presidency and the Senate come November.

Most importantly, however, we can see that there was a significant increase in participation among ­those who score low in outgroup hostility­­, with the upswing in participation most dramatic among those who were the most liberal in attitudes toward outgroups

Today, politics is at least as racialized as in the 1960s, though the nature of racism has changed. In research for our forthcoming book, Hard White: The Mainstreaming of Racism in American Politics (Oxford University Press, 2020), we find that a crucial factor in Donald Trump’s victory in the 2016 presidential election was his success in mobilizing White American non-voters in critical swing states largely by appealing to their racial resentments as expressed in a more generalized “outgroup hostility” toward African Americans, Latinos and Muslims. Our research confirms what more than one or two studies have found — that much of that resentment was fueled by the election of Barack Obama as president, the first African American to ever hold that office. Yet, US politics we argue are cyclical and just as the Trump campaign profited from a reaction to Obama’s presidency, the counter movement that produced the Blue Wave, arose in reaction to Trump’s fanning the flames of outgroup hostility. Our research shows that the Blue Wave, like the Trump campaign, was successful to a significant degree by mobilizing non-voters based on racial attitudes. However, in reaction to the racism manifested in Trump’s Presidency, the Blue Wave responded by mobilizing racially liberal non-voters to augment the Democrat vote in 2018.

Evidence of this fact can be found in the form of two trends that we document in our forthcoming book. First, there has been a marked decrease in hostility among White Americans toward Black Americans, Latino immigrants and Muslims over the last decade. Most significantly, though, the magnitude of this decrease in outgroup hostility varies by partisan identification. Although this is true for attitudes toward all three racial outgroups, the trends are particularly striking for the racial resentment scale, the most commonly used measure in the social science literature of hostility toward African Americans. For the figure we present below, we have transformed that scale to range from 0–1, with values above .5 indicating some degree of hostility and values below .5 representing sympathy toward Black people. We refer to the White Americans who score below the .5 mark for the racial resentment scale as “racial liberals.” While attitudes have remained largely stable for Republicans and Independents, there has been a rather significant increase in the number of racial liberals among Democrats. Although there was a slight decrease in racial resentment among White Democrats in 2012, the proportion of White Democrats who scored as racial liberals has greatly accelerated in the Trump era producing an even greater decline in the overall average level of racial resentment among Democrats as indicated in the figure below.

The research in our book further indicates that not only has there been a significant growth in racial liberals it seems that sympathy toward the racial outgroups most frequently targeted by Trump since 2015 — Black people, Latino immigrants and Muslims — played a significant role in the 2018 Democrat midterm victory. Yet, the effect of racial liberalism in the 2018 election was not due so much to a change in attitudes toward Trump between 2016 and 2018. Rather, 2018 more significantly saw an increase in the active political participation of racial liberals in opposition to Trump’s racism. Racial liberalism among Democrats had increased by 2016 but what actually made the critical difference in 2018 was the increased political participation of those racially liberal Democrats.

We provide two sources of evidence to support this conclusion. First, using data from the 2016 and 2018 American National Election Studies (ANES) surveys, we examined the relationship for the complete sample between a measure of outgroup hostility toward Black people, Latino immigrants and Muslims and a measure of political mobilization constructed by summing the number of political activities reported by each respondent over the preceding 12 months, where the activities included (1) posting a political comment on social media, (2) giving money to a political candidate or organization, (3) attending a political meeting, (4) attending a political protest, (5) displaying or wearing campaign materials, or (6) trying to persuade others to vote one way or another. We then estimated the relationship between outgroup hostility and the political participation index, controlling for party identification, ideology, the feeling thermometer for Trump, and other demographic factors. The results are presented in the figure below. 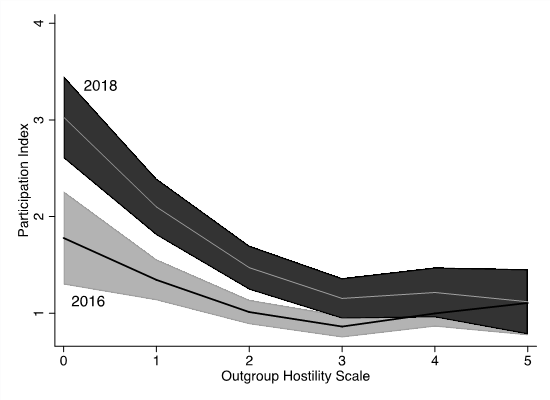 Ordinarily, we would expect that the level of mobilization in 2018 would be lower than what it was in 2016 due to the fact that participation usually drops off during midterm elections. Instead, the level of participation remained the same for those with high levels of outgroup hostility (on the right end of the figure), despite the fact that our research as reported in our book indicates that enthusiasm for Trump by 2018 may have dampened a bit among racial extremists. Most importantly, however, we can see that there was a significant increase in participation among ­those who score low in outgroup hostility­­, with the upswing in participation most dramatic among those who were the most liberal in attitudes toward outgroups (on the left end of the figure).

We supplement this analysis by examining White American voters only using validated turnout data from the most recent version of the VOTER panel survey for 2016–2018. For this analysis we focus on two processes that affected the composition of the midterm electorate — the mobilization of new voters (defined as those who voted in 2018 but had not voted in 2016), and the demobilization of 2016 voters (defined as those who voted in 2016 but then did not vote in 2018). We hypothesize that racial liberals with low levels of outgroup hostility were more likely to be mobilized and less likely to be demobilized. We find that outgroup hostility had a statistically significant effect in the expected directed for both the mobilization and demobilization analyses and in both cases it was the primary factor predicting White turnout (see our online appendix for detailed results). 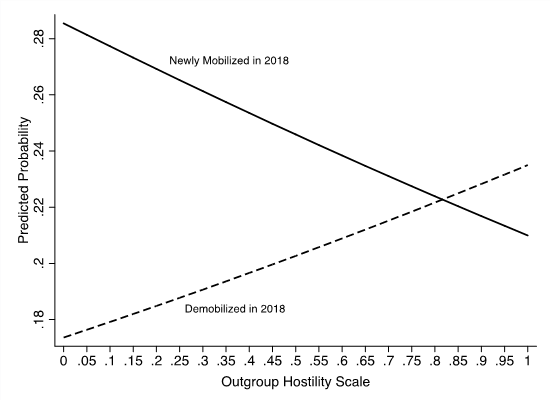 If the recent protests are any indication, it may be that the racial liberalism of the Blue Wave is not done washing over our politics. Our research underscores how a broad, multi-racial coalition of people with liberal attitudes on issues of race and diversity could successfully mobilize to defeat Trump and the Republicans in the fall.

Some people might disagree with our analysis by suggesting that there is little to no relationship between protest and electoral politics. It is true they often involve different leaders and actors. It is more than readily apparent to even the casual observer that most often protesters appear to be younger and less well-off and also more alienated from the conventional political system. Frances Fox Piven and Richard Cloward however for years prominently emphasized that there is a symbiotic relationship between protest and electoral politics. A growing body of political science research in fact has found evidence of the connection between protests and elections. In particular, protests publicize grievances, heighten consciousness about them, intensify conflict over them, and mobilize support for taking action regarding them, but elected officials at critical moments can feel pressure that if they do not respond a voting public will make them pay. In fact, our own past research showed that the connection between protests and welfare policy responses in the late 1960s and early 1970s was greatest when policymakers were more likely to face electoral consequences. In other words, choosing to emphasize either protest or electoral politics at the expense of the other is a false choice and a strategic mistake.

The relationship between the George Floyd protests and the coming 2020 election may, in fact, be stronger than the connection between previous protests and elections. Today’s racially diverse set of protesters, who are often young and unlikely to be active voters, are a key target group for mobilizing non-voters to extend the 2018 midterm Blue Wave into the fall presidential election.

It is definitely not 1968 when Republican presidential nominee Richard Nixon used the Black insurgency against the incumbent President Lyndon B. Johnson to claim the President had failed to enforce “law and order.” Today, the protest-election connection could prove to be quite different because an incumbent Donald Trump is now vulnerable to repudiation as a racist President who has consciously chosen to not combat persistent racial injustice but instead to perpetuate it.

Sanford F. Schram is Professor of Political Science at Hunter College and Professor of Sociology at the Graduate Center, City University of New York.