According to the National Study of Learning, Voting, and Engagement (NSLVE), Oklahoma college students register to vote at rates consistently lower than the national average. Specifically, at the University of Oklahoma, the student voter rate is between 4 and 6% lower than that of other institutions, and although groups of students show high levels of civic engagement, participation in political processes is far from institutionalized (NSLVE). Young voter non-participation rates pose a problem throughout the state as well. In 2012, citizens aged 18-24 voted at the third lowest rate in the nation, at just 27.1% (Oklahoma Policy Institute). According to Census Bureau survey data, only 11.8% of Oklahomans aged 18-24 and 20.9% of Oklahomans aged 25-44 voted in 2014 (Oklahoma Policy Institute).

That’s where we come in.

The mission of Oklahoma Votes is to ensure the “Registration, Education, and Mobilization” of students at the University of Oklahoma. We’re a campus-wide initiative whose purpose is to encourage students to register to vote and to participate in local, state, and national elections. In the past year, Oklahoma Votes doubled our executive team by adding four new chair positions: Coalition Outreach, Programming, Public Relations, and Volunteer. In addition to us, the two co-chairs, the Oklahoma Votes executive team now consists of six motivated women from all corners of campus. We’re passionate about getting our peers out to vote and improving civic engagement in the communities we represent–supported by an inspiring staff advisor who keeps us on our toes. Our recent expansion has allowed us to reach high: in the fall of 2019, we won the State Regents Campus Compact voter registration contest by registering over 700 voters in a period of two months. In 2020, we hope to register over 2,000. 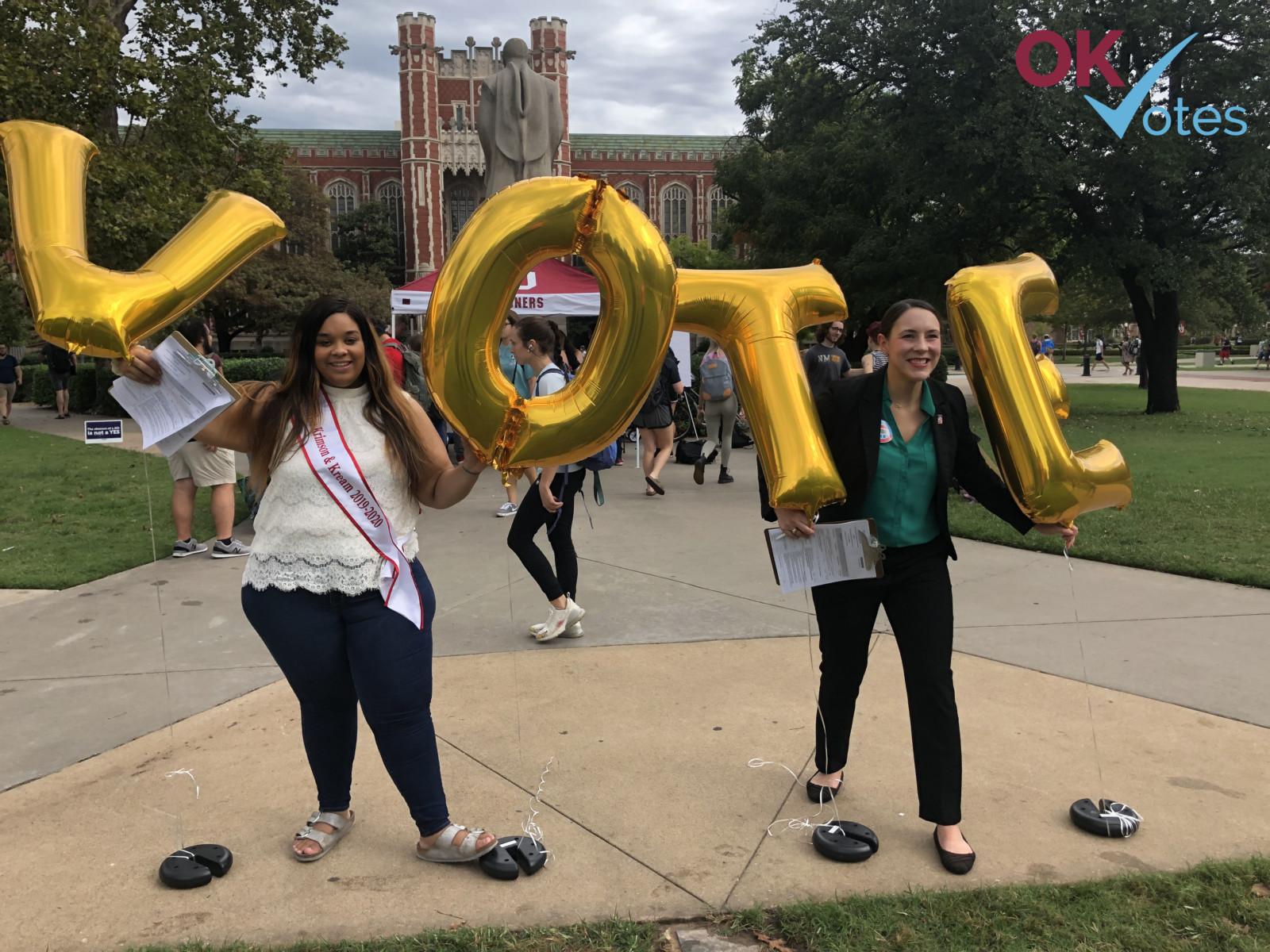 Since our campus and our state have historically low levels of civic engagement, our work requires us to navigate uncharted territory and be creative in our approach. As we pursue our goals, we are actively seeking to determine the best ways in which we can engage our fellow students. Instead of waiting for students to come to our tables or to our events, we are focused on meeting them where they are. This includes making presentations in front of their classes and student organizations, including sororities and fraternities. We also emphasize collaboration and rely on partnerships with our Student Government Association and first-year orientation programs. We are also passionate about reaching multicultural students because their voices are often marginalized in the political process through voter suppression. We are working with multicultural organizations like Voto Latino, Asian American Student Association, Black Student Association, and American Indian Student Association to ensure these students have the proper resources to vote on Election Day. Our hope is that this coalition-based model will help us to normalize and institutionalize civic engagement on our campus so that civic engagement becomes part of the everyday life of OU students.

The deadline to register to vote for the Oklahoma primaries is February 7 and our primaries will take place on March 3. As we look ahead to these dates, we plan to set up a table in the heart of campus that invites students to register to vote and educate themselves on our state’s primary process (as well as drink hot chocolate, of course). We’ll make appearances in classrooms all over campus and enlist political science professors to collect voter registration forms before each of their lectures. We also plan to partner with our coalition members to provide them with registration materials and streamline form collection and submission. We’re excited about the level of visibility this event will bring for the primary deadline as well as for our work. As always, we hope that students will be just as excited as we are and sign up to join our cause. 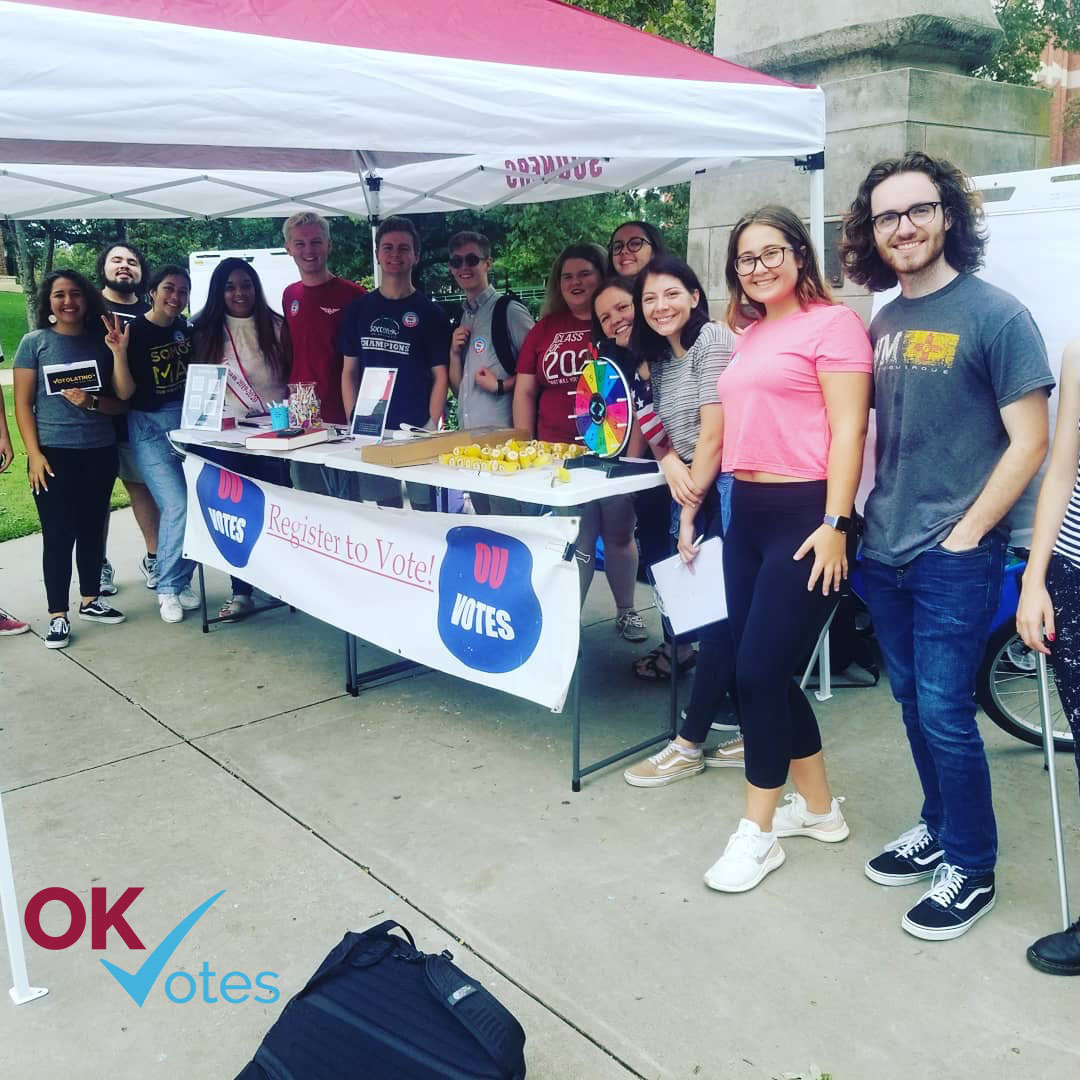 Over the next few months, we’re looking forward to encouraging student excitement about our state’s June primary. We will provide more complete information about election processes and design and utilize vote tripling cards, which are pledge cards that commit each voter to bringing three friends to the polls on Election Day. We also plan to provide students with greater access to reliable nonpartisan information about their candidates and intentionally foster cross-party conversations by bringing together student groups and outside speakers of diverse professional, political, and demographic backgrounds. On top of this, we’re thrilled to help our campus gear up for the 2020 census in order to prevent the historical undercounting of OU and surrounding neighborhoods.

We know this work has never been and will likely never be easy, but we’re encouraged daily by kind words from students and staff who see the value of our efforts. Regardless of the challenges we face, we feel strongly about setting high goals. And we’re just getting started.

Natalie Bayer is a junior from Austin, Texas studying Women’s & Gender Studies and English Literature with a minor in Spanish. She is currently serving as a Civic Engagement Fellow at OU’s Carl Albert Congressional Research & Studies Center. After completing her undergraduate degree, she hopes to pursue a career in law with a focus on gender.

Destinee Noel Dickson is a senior from Oklahoma City, Oklahoma studying Political Science and Women’s & Gender Studies with a minor in Constitutional Studies. She is currently serving as a Civic Engagement Fellow at OU’s Carl Albert Congressional Research & Studies Center. After graduation, she plans to attend law school and pursue her goal of being appointed as a Justice on the Supreme Court of the United States.