Donna R. Hoffman, Christopher W. Larimer and Justin W. Holmes, faculty members in the Department of Political Science at the University of Northern Iowa, are guest contributors for the RAISE the Vote Campaign. The views expressed in the posts and articles featured in the RAISE the Vote campaign are those of the authors and contributors alone and do not represent the views of APSA. 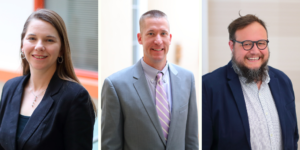 Iowa holds a unique and privileged position in the parties’ presidential nomination campaigns.  The Iowa precinct caucuses, held early in a presidential-election year, present students at Iowa colleges and universities with opportunities and challenges.  Part of the mission of the Department of Political Science at the University of Northern Iowa, and the corresponding missions of both our student government, as well as the American Democracy Project in which we participate, is to help encourage and facilitate students’ civic engagement.  As such, the Department (with our partners) offers bipartisan training for students who wish to attend their precinct caucus.  Since 2004, we have offered a “Mock Caucus” to students who may want to attend a precinct caucus, but don’t know how to go about participating.

Living in the first-in-the-nation caucus state offers our students unique opportunities.  Candidates are on the ground in Iowa for years preceding the caucuses; students who wish to participate in campaigns through volunteering, interning, and even through paid positions, are going to be limited only by their own schedule.  Students have multiple opportunities to see candidates close-up, often interacting with them on a personal level.  Further, campaigns actively seek out supporters, make concerted efforts to get them to commit to their candidate, and commit to caucusing.

When it comes time to caucus, however, the process can be intimidating.  As part of our bipartisan training, we take students through the nuances of the processes, which are different depending on whether one attends a Democratic or a Republican caucus.  First, students must understand that Iowa is a “closed” state.  As such, students must be registered with either the Democratic Party or the Republican Party to participate in the precinct caucuses.  This can be a particular challenge in the state, where a plurality of voters are registered as “no party.”  Fortunately, Iowa provides for same-day registration, so students can register to vote at their caucus site before the event, as well as change their partisan (or “no party”) registration so that they may participate.  Technically a closed state, Iowa functions more like an open state due to these provisions.  If students choose to participate, these rules help facilitate last minute decision-making to which students may be prone.

As we encourage students to engage civically through the unique opportunity the precinct caucuses afford us, we are also mindful that students grasp not just the significance of the Iowa Caucuses, but also its place within the decentralized way each party arrives at its nominee.

Another challenge can be rule changes from cycle to cycle that may impact procedures from the previous caucus. While it really isn’t a process shrouded in mystery (each party follows known rules), for students whom have never participated, it can seem that way.  It is not a simple balloting event; it is the party engaging in grassroots governance, and caucuses include not just signaling support for a candidate, but electing delegates to the county convention, electing representation to the county party, and beginning the process of elevating platform planks.

Precinct caucuses are organizationally complex and decentralized.  Campaigns (ideally) have an organizer for each precinct.  In 2020, there will be nearly 1700 precincts in the state.  Precinct caucuses generally occur in a location that is different from one’s regular precinct polling site.  Within each precinct (for each party), the atmosphere on caucus night is going to be one of excitement, uncertainty, competition, high emotion, and often chaos.  It is helpful if participants know where to go and what to expect.

Our approach to our mock caucus event is inclusive; students will first participate in a caucus using the GOP’s system, which is a bit more straight-forward than the Democrats, and then they will caucus as Democrats do.  Exposing students to both rule systems and processes enables students to compare and contrast the difference between how the parties do things, and at the same time understand the end result is essentially the same; both parties will select delegates to the county convention, elevate platform planks, and hold party governance elections.

As each party gathers on caucus evening, various preliminary items take place such as the pledge of allegiance, maybe a prayer, electing leadership for the purpose of conducting the caucus, and a passing of the donation hat.  Supporters (sometimes even candidates themselves) may briefly speak.  The Republicans will have attendees write down the name of the presidential candidate whom they support.  Official business of the party will then take place while votes are being counted.  The Democrats, after preliminary matters, will have supporters literally stand for candidates.  The above photograph from our 2012 Mock Caucus shows students being “Democrats” and dividing into groups in different corners of the room.  Because Democrats use a form of proportional representation with a viability threshold, groups not attaining 15% get time to realign, either joining other preference groups, or trying to persuade fellow attendees to realign and join them so that they might become viable.  New to the Democrats this year will be attendees filling out Presidential Preference Cards (for reporting and recount purposes) both at the initial alignment, as well as for the realignment.  Taking students through the processes helps de-mystify them, gives them a notion of what to expect, and hopefully encourages them to attend a caucus of their choosing.

As we encourage students to engage civically through the unique opportunity the precinct caucuses afford us, we are also mindful that students grasp not just the significance of the Iowa Caucuses, but also its place within the decentralized way each party arrives at its nominee.  Furthermore, it is also important that students recognize caucuses are more than just signaling support for a candidate; they are a key element in grassroots party governance.  Being the lead-off state, Iowans certainly do not pick either party’s nominee, but we often do help to winnow the field.  It is a civic responsibility we encourage our students take seriously.

Donna R. Hoffman, Christopher, W. Larimer, and Justin W. Holmes are faculty members in the Department of Political Science at the University of Northern Iowa, where they teach various aspects of American politics.  They are all repeatedly called upon by numerous actors to explain and interpret the Iowa Caucuses on what has become a fairly continual basis.

The contributors for this post were recommended by the State Politics & Policy Organized Section and the Presidents and Executive Politics Organized Section. Joining an APSA Organized Section, like these, can provide an additional way to network and get the word out about your research, teaching, and other professional activities. Consider joining one of these sections today!