Gregory Koutnik, a PhD candidate studying political theory at the University of Pennsylvania,is a guest contributor for the RAISE the Vote Campaign. The views expressed in the posts and articles featured in the RAISE the Vote campaign are those of the authors and contributors alone and do not represent the views of APSA.

As global temperatures and sea levels rise, so too does the need for democratic demands for climate action. American history is punctuated by periods of popular agitation that alter the balance of political power and make possible what had been impossible reforms. Is America capable of such a period of democratic reform? Are we experiencing one now? If so, will our populist moment enable decisive action on climate change? Or will it reinforce inaction?

The urgency of such questions could hardly be greater.

Last year’s United Nations IPCC report warns that avoiding the most catastrophic effects of climate change will “require rapid, far-reaching and unprecedented changes in all aspects of society.” The report also points to the “clear benefits to people and natural ecosystems” that come with “a more sustainable and equitable society.” According to the Stanford Political Psychology Research Group, robust majorities of the American people have consistently viewed climate change as real, as driven by human activity, and as a threat to the country and to the world. Yet the United States is currently in the process of pulling out of the Paris Climate Accords, and both political parties have largely failed to adopt reforms that will reduce greenhouse gas emissions at the pace required to avert the worst effects of climate change.

But if climate change is such a problem, and if the public largely agrees, then why has more decisive action not been taken in the United States?

A number of factors are likely at play, including partisan polarization at home and the difficulties of negotiating binding global climate agreements abroad when the short-term costs and benefits of climate action vary around the world. Moreover, industries that have a financial interest in maintaining a carbon-intensive economy resist efforts toward decisive climate action and even sow doubt about climate science, just as tobacco companies did about the health risks of smoking a few generations ago.

All of these factors, I argue, make democratic engagement on the issue of climate change especially important. Moreover, simply increasing voter participation is likely not enough, because, as John Meyer has argued, environmental problems suffer from a “resonance dilemma” in which the public recognizes the issue but politicians do not prioritize it—in large part because they do not see the issue as a high priority for the public. Civic participation means more than getting out the vote. It also means embracing modes of participation and agitation—such as movement-building, protesting, and building new democratic institutions—that make climate change a top political priority. The only alternative, as political theorists like William Ophuls have pointed out, is rule by experts who have the power to assert their will against any and all opposition.[1] Rather than putting our trust in ecological philosopher-kings, I suggest that we look to a perhaps unlikely source of inspiration—the populist tradition in American politics. 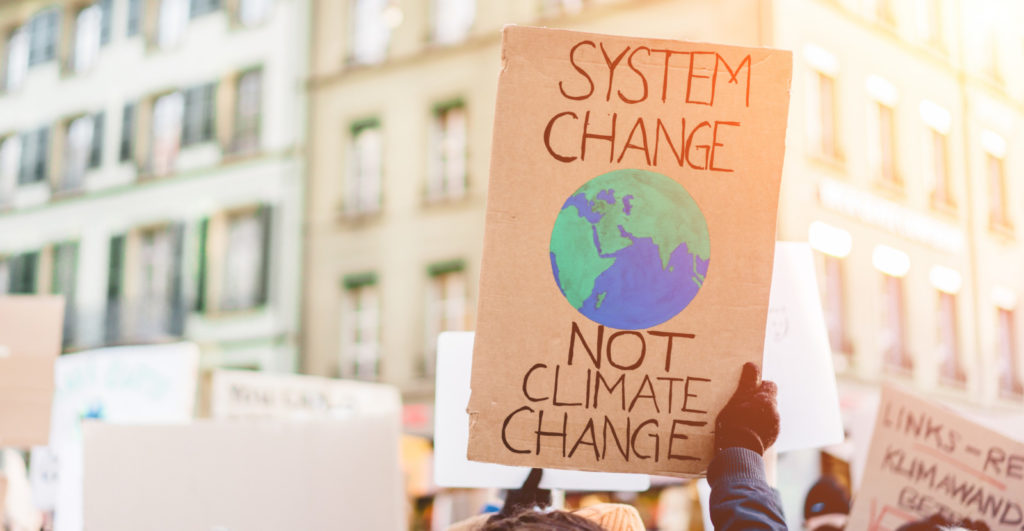 Scholars have defined “populism” in many different ways, though there is general agreement that populists conceive of politics as a struggle between ordinary people and corrupt or oblivious elites in power.

As historian Michael Kazin has shown, populism appears throughout American history and across the political spectrum, from the farmer-labor populists of the late 19th-century (for whom the term “populist” was coined) to the labor activists of the New Deal to the conservative activists who fueled the Reagan Revolution. It is no wonder, then, that contemporary politicians as wide-ranging as Bernie Sanders, Elizabeth Warren, Mike Huckabee, and Donald Trump have all been described by that label, or even have consciously adopted it themselves.

Paying attention to populist politics allows us to see the moments in American political history in which popular opinion and grievances translated into civic engagement that extended beyond voting, including concerted efforts to reorient the priorities of the two major parties—or even create a third party, as the original populists attempted to do. Given the political inertia surrounding the issue of climate change, perhaps what is needed is a populist resurgence that will fuel civic engagement and make decisive democratic climate action possible.

Civic participation means more than getting out the vote. It also means embracing modes of participation and agitation—such as movement-building, protesting, and building new democratic institutions—that make climate change a top political priority.

Needless to say, populism does not automatically translate into climate action. Populism can cut both ways. Important research by Kathy Cramer and Arlie Hochschild suggests that populist appeals can also be made by opponents of environmental policies, especially when rural voters view these policies as a threat to their economic wellbeing. Indeed, this is arguably what has happened recently in France with the “Yellow Vest” protests and in Washington State with the failure of Initiative 1631. In both cases, carbon taxes designed to reduce greenhouse gas emissions met popular opposition in large part because many saw the burdens of the carbon tax as unfairly concentrated on those trying to make ends meet. This suggests that climate policy must take into account issues of equity and environmental justice. But it also suggests that smart policies and scientific expertise are not enough to jumpstart the politics of climate change. Civic engagement is, in itself, a necessary component of any politically sustainable solution. Rather than creating technocratic fixes that may not address the needs of everyday people, climate action requires robust democratic participation, both to get off the ground and to maintain the popular support necessary to succeed.

There are no guarantees in a democracy.

Democratic majorities can mobilize for or against the policies and principles one desires. But the environmental problems of our time, including climate change, cannot be addressed without the kind of robust civic engagement that characterizes the populist moments in our nation’s political history. Whatever happens in 2020 and beyond, history will surely judge us in part on whether our nation succeeded in tapping into its populist strength to make democracy work for everyday people and for future generations who will inherit the earth we leave for them. Civic engagement and political participation are the surest means to make that happen.

[1] William Ophuls, Ecology and the Politics of Scarcity: Prologue to a Political Theory of the Steady State, W.H. Freeman, 1977.

Gregory Koutnik is a PhD candidate studying political theory at the University of Pennsylvania. His research explores the politics of ecological belonging with special attention to issues of property, environmental stewardship, place-based attachments, and populist politics. He is a former graduate fellow at the Andrea Mitchell Center for the Study of Democracy and the Penn Program in the Environmental Humanities.