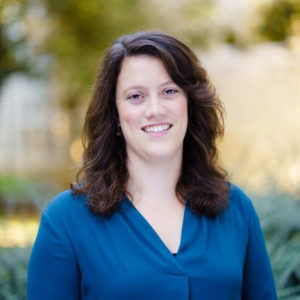 In Making Young Voters, John B. Holbein and D. Sunshine Hillygus argue that young voters are no less interested in politics than their older counterparts but nonetheless are far less likely to vote than any other age cohort. Why? Because many of them lack the perseverance needed to overcome the institutional hurdles and the knowledge burden faced by first time voters. In order to increase the youth vote, Holbein and Hillygus conclude, we need to decrease institutional barriers and increase our educational focus on “noncognitive skills” like self-efficacy, sociability, persistence and self-control.[1]

As a small liberal arts college in Central Texas, Southwestern University is no stranger to institutional barriers to voting. In 2019, the Texas legislature passed HB 1888, which prevented the operation of single-day Early Voting sites like the one we’d hosted on campus during the midterm election the previous October. This year, Texas is one of only a handful of states that did not accept fear of COVID-19 as an acceptable reason to request a mail-in ballot, and Governor Greg Abbot signed an order to limit counties to a single absentee ballot drop-off location. What’s more, the state does not allow online voter registration and student ID cards are not considered valid voter identification.

Over the past five years, a team of faculty, staff and students at Southwestern has worked to reduce the effects of these barriers on our students and to develop the noncognitive skills that Holbein and Hillygus suggest will help them vote in spite of the barriers that remain.

Over the past five years, a team of faculty, staff and students at Southwestern has worked to reduce the effects of these barriers on our students and to develop the noncognitive skills that Holbein and Hillygus suggest will help them vote in spite of the barriers that remain. With support from coalitions like the Campus Vote Project, the Annette Strauss Institute at UT-Austin, and our campus’s National Study of Learning, Voting, and Engagement (NSLVE) report, we have set increasingly challenging institutional goals each election cycle. In this post, we offer a few examples of ways Southwestern University has sought to remove barriers to student voting, drawing on lessons from political science research in hopes of meeting this year’s goal of a 55% turnout rate. 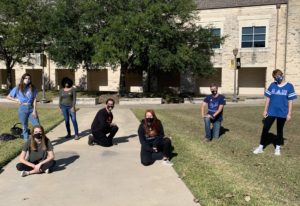 Bringing a Polling Place on Campus. People are more likely to vote when they have easy access to a polling place.[2] Texas law requires that any Early Voting location be open for the entirety of the early voting window, which was expanded this year to 17 days. We couldn’t commit a building on campus for the entire window, but we are able to host a polling place on Election Day. Especially with the advent of COVID-19, this required collaboration across all levels of campus and with the county elections office. Over 200 members of the Southwestern community and the surrounding neighborhood took advantage of the opportunity to vote on campus on November 3.

Helping Students Make a Plan. Many students say they intend to vote, but don’t have a good sense of how they are going to implement that intention. Research suggests that creating a voter plan—figuring out when, where, and for whom you will vote—before heading to the polls can increase one’s likelihood of voting.[3] To encourage our community to make a plan, we created the “Make a Plan” contest, in which students could earn bragging rights for their favorite student groups on campus and win an “SU Votes” face mask. In addition to posting about the contest in the usual information sources for students and faculty, the university president included a link in emails she sent out to the students on the final day of registration and the first day of early voting. Over 300 members of the campus community created a plan using our tool, and several sent personal messages of thanks and appreciation of how useful it was for them.

Incorporating Voter Education in the Classroom. In “Candidates, Campaigns and Citizens,” an elective course on campaigns, elections, and voter behavior, students read the final chapter of Gerber and Green’s Get Out the Vote and summaries of other GOTV field experiments[4] before designing a strategy to mobilize a chosen population on campus. This year’s ideas focused primarily on reaching out to first-year students, whether through voting-themed events at fraternity or sorority recruitment events, information on course Moodle sites (our LMS), or door-to-door leaflets. Because these ideas are coming from students, they’re more closely tied to campus culture and tap into behaviors, preferences and networks to which faculty and staff are not always privy. 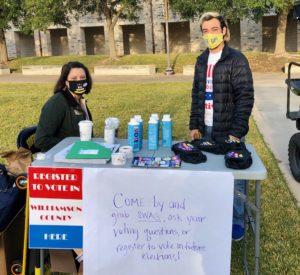 After discussing federalism, the effects of voter ID laws, and Texas election laws, students in American Politics design voter education materials for the campus community. Using free design tools like Canva, students created fliers, social media posts, and presentations about voter registration, appropriate voter ID, the process of requesting and submitting a mail-in ballot, and voting in person. We then worked with the university’s Marketing and Communication department and the Student Activities office to disseminate the materials on official university social media and to post information in high-traffic areas on campus.

It takes a village. Southwestern’s student experience centers around making connections—and it is clear to those of us working on voter engagement how important connection and collaboration are to dismantling barriers and empowering students to vote. Our success is a result of administrative leadership support–the willingness to host a polling place on campus during a pandemic and to send emails to students reminding them about voting. It’s a result of faculty integration of voter engagement into courses and staff commitment to coordinate logistics, pick up stacks of voter registration forms from the county elections office, and drop off voter guides around campus. And most importantly, it’s the result of a set of enthusiastic students pushing us to set higher and higher goals, organizing events, answering questions, creating websites and putting in the work to make voting accessible and appealing to their peers.

While it will be a while until we have all the evidence to assess the impact of our efforts, early data from the Center for Information and Research on Civic Learning and Engagement (CIRCLE) suggests national youth turnout will be between 53 and 56%, and those numbers may be even higher in Texas, where people under the age of 30 shattered records for total votes cast before Election Day. These data buoy our sense of achievement and have already inspired dozens of new ideas for continued accessibility and education efforts.

Emily Sydnor is assistant professor of political science at Southwestern University in Georgetown, TX. She researches the impact of civility and incivility in the media and their effects on Americans’ political behavior.