Jennifer J. Hora, Associate Professor of Political Science and International Relations at Valparaiso University, and Kylie Schreiber Wolf, Valparaiso University, are guest contributors for the RAISE the Vote Campaign. The views expressed in the posts and articles featured in the RAISE the Vote campaign are those of the authors and contributors alone and do not represent the views of APSA. 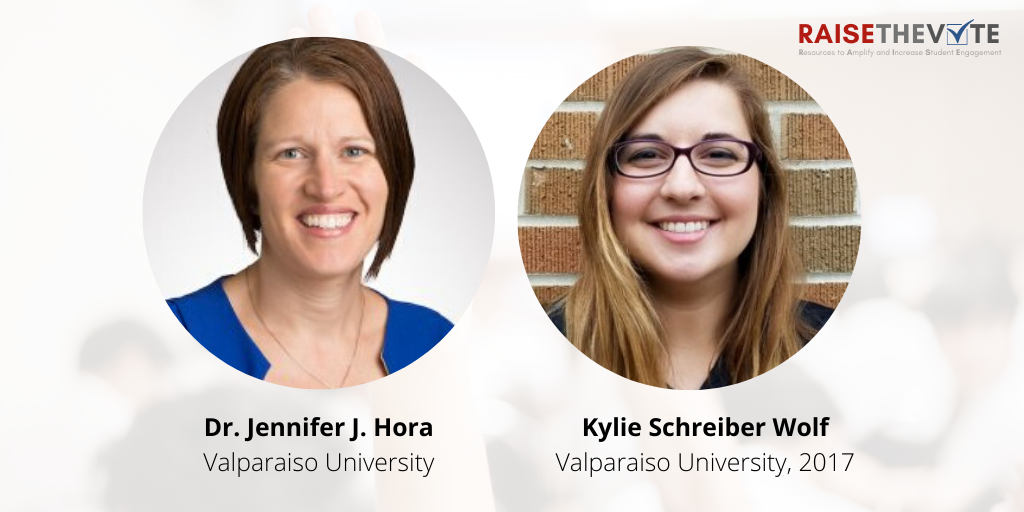 Following real life politicians, college campuses are starting to gear up for the 2020 election. What does that mean for those of us employed somewhere other than Iowa or New Hampshire? On the Valparaiso University campus, this means figuring out how to motivate a highly mobile, young student population to fully engage in the election cycle. The Beta Nu Chapter of Pi Sigma Alpha, the national political science honor society, played an active role in the 2016 election and we are looking to repeat that role in 2020.

Nine campus organizations united to sponsor “Voting Made Simple” on October 4, 2016. Over 200 faculty, staff, and students participated in this two hour evening event where they checked their voter registration status, registered to vote as necessary, gained access to relevant voting procedures and candidate information, and requested absentee ballots. 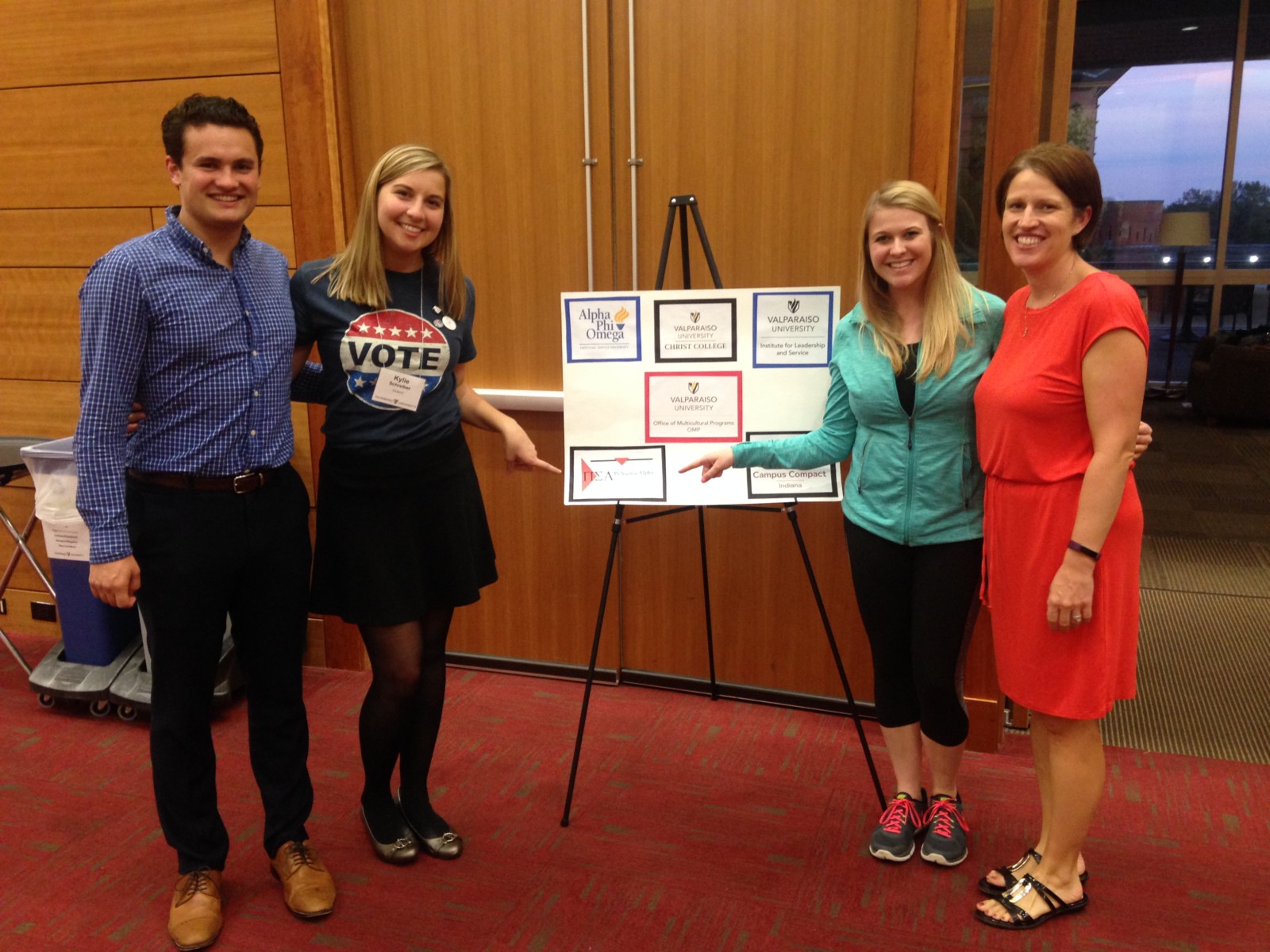 The key ingredients for achieving success for Voting Made Simple included:

The staffing for event organization and execution is critical.  Staffing four tables for checking voter registration and securing absentee ballots across potentially 50 states, where many states delegate the entire process to their counties, requires many volunteers.  Even drawing from nine sponsoring organizations meant many of the workers were literally running on the day of the event.  Another benefit to having so many co-sponsoring organizations is the additional word-of-mouth advertising on campus; increasing the number of students, faculty, and staff involved also increases stakeholders interested in the success of the event.

2) A Concentration of Enthusiasm.

Pointedly, an enthused individual (or team) is necessary.  One student, the co-author for this post, Kylie Schreiber Wolf, proved critical to the organization of Voting Made Simple.  Not only did she initiate the event, at many points she provided the sweat equity: running forms across campus for signatures, making calls, and looking for volunteers to assist.

Obtaining an outside grant, booking prime campus event space, and securing a keynote speaker are often essential to the success of this type of event.  While the costs were not substantial, (approximately $1200), they were outside the normal annual budgets for any one sponsoring campus organization.  An external grant from an organization dedicated to civic engagement provided the heart of the funding. 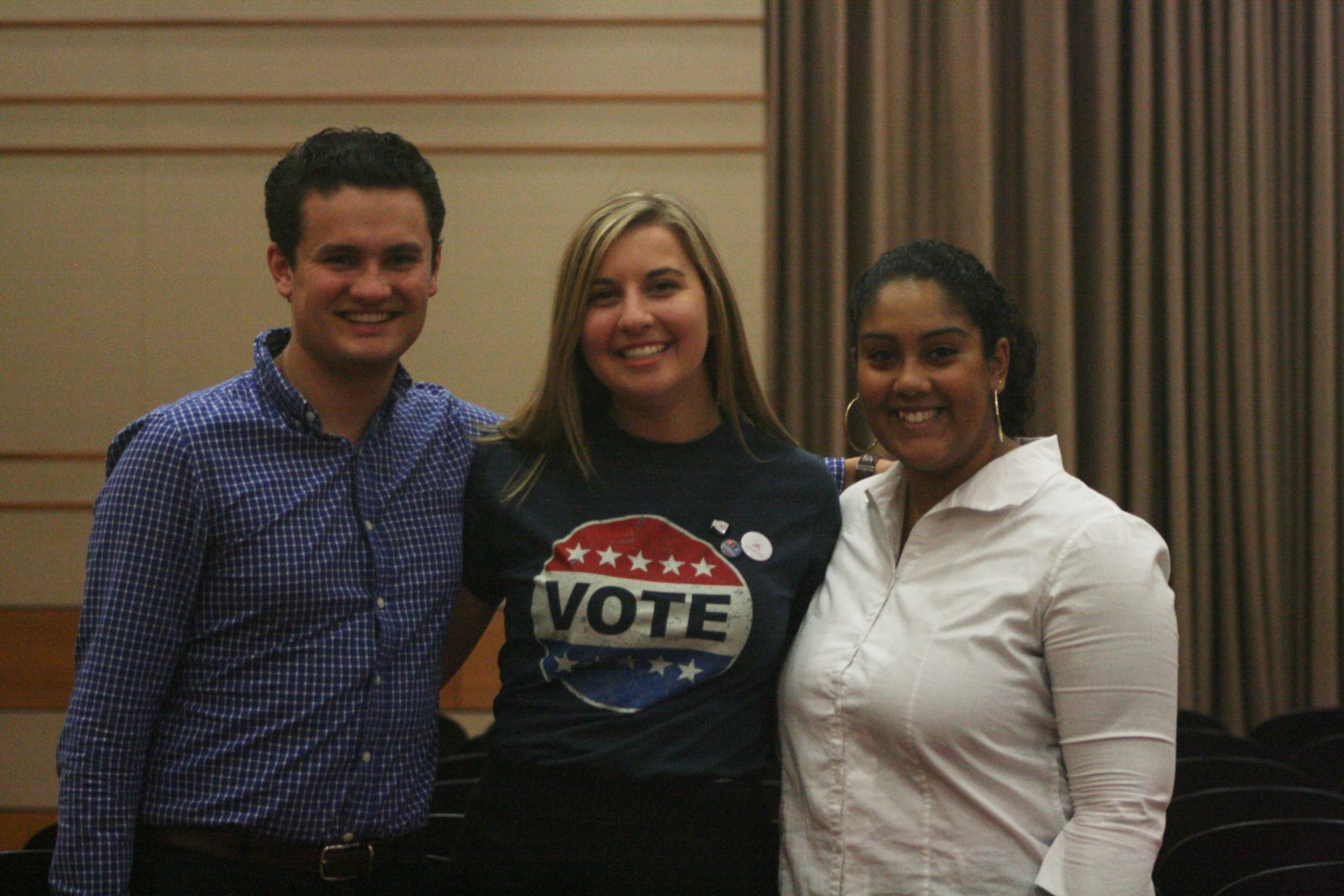 Political science departments often feel pressure to demonstrate their inclusive nature both inside and outside the classroom.  Two non-partisan campus organizations provided the main sponsorship and coordination: the VU Mock Trial Club and Pi Sigma Alpha, the Political Science National Honor Society.  Having two organizations with membership across the political aisle (and even non-partisan or third party membership) set the tone for this nonpartisan event.  Furthermore, Valparaiso University College Democrats and College Republicans have developed a long history of co-sponsoring events (which we have been told by organizations off campus is quite unusual).  As one Political Science Department member is advisor to both the honor society and College Democrats and another department member is advisor to College Republicans, we take pride in looking for unifying issues.  Voter registration, absentee ballots, and election information clearly fits in the area of unifying goals.

5) Extroverts for Some Tasks.

Different personalities make-up the student body of most universities and majors, and Valparaiso University’s Political Science and International Relations Department is no different.  Many elements of the planning for Voting Made Simple required an outgoing personality.  Organizers had to reach out to book speakers and volunteers, sign up sponsors both on and off-campus, train volunteers for fifty different systems of absentee ballot requests, and coordinate extensively with campus administrators and staff.  For a successful event, we needed multiple people unafraid to ask for favors, and ask again.

6) Introverts for Other Tasks.

In addition to many organizational efforts needing an outgoing personality, Voting Made Simple utilized many behind-the-scene skills.  Writing skills were necessary for the grant proposal and grant reporting requirements, as well as budgeting skills.  A couple of the more invested stakeholder groups invested significant time using research skills figuring out who the likely target population would be (given the demographics of the  student body) and preparing appropriate materials for success.  Given the dignitaries attending (including the University President, multiple deans, and an NPR reporter), the organization spent significant efforts on professional-level advertising, including: creating posters with sponsoring organization’s branding, creating promotional slides, and creating marketing fliers. The collection of registration forms, envelopes, stamps, a photocopier, etc., also required a lot of volunteer hours. 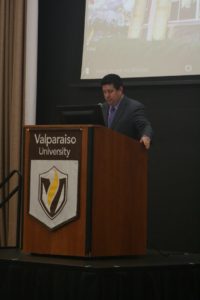 The student organizer led the effort to secure a speaker with name recognition, Michael Puente : the Northwest Indiana reporter for Chicago NPR.  While Puente touched on a few 2016 election events focusing on candidates Trump, Clinton, and Sanders, primarily he discussed media coverage and the struggle to be a well-informed voter, especially when overwhelmed with information from Twitter, Facebook, other social media. The keynote speaker was given a lot of leeway of what to focus on, as long as it was relevant to the target audience of college students. By focusing on his expertise, which included issues related to the media as well as the critical importance of being engaged in one’s community, Puente was able to be specific, but not partisan.

As with any large-scale event on a small campus, the organizers need to create some good will preparing for the event, because it will be needed.  For our event, volunteers were shifted from one location to another, from research duty to moving chairs and running for photocopies.  The ultimate flexibility was perhaps how the two main organizers, the authors here, were asked by the NPR reporter and keynote speaker if they could help him locate a Vice-Presidential Debate Watch Party.  With only 24-hours notice they threw together an in-home dinner and debate viewing event. Honor Society students attending were interviewed by Puente, and the Valparaiso University Student Senate President’s interview was aired on  Chicago NPR the next day, offering insight as a member of the Political Science Honor Society.

Events such as this create meaningful and memorable student-faculty shared experiences.  The Voting Made Simple Event capitalized on a large number of bipartisan and nonpartisan sponsoring organizations, a couple of enthusiastic participants, advance planning, and the skills of both introvert and extroverted students.  Through the recruitment of a speaker with broad appeal and the flexibility of the planners, this event grew beyond the original goal and continued in to the evening.  The increase in civic engagement was palpable this day; rather than lamenting in a lecture about low civic engagement for 18-25 year olds, Valparaiso University’s Voting Made Simple event actually sought to remedy the problem and simplified community participation.

Jennifer J. Hora is an associate professor of Political Science and International Relations at Valparaiso University.  Her teaching and research interests include American Political Institutions. Her research has been published in Congress and The Presidency, Guide to Urban Politics and Policy in the United States and Public Works Policy and Management.

Kylie Schreiber Wolf is a graduate student at IUPUI’s O’Neill School of Public and Environmental Affairs. While studying Political Science and Communications at Valparaiso University, she was passionate about voting and political engagement. She is currently employed at Thomas P. Miller and Associates as the Workforce Ecosystem Coordinator working with Marion County’s local workforce investment board.