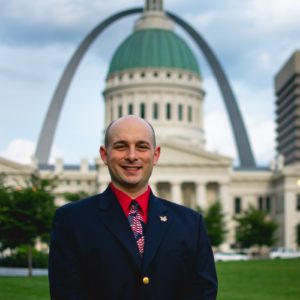 By the time that Missouri holds its Democratic presidential primary election on March 10, 2020, 36 days will have passed since the country’s first nominating event in Iowa, and a total of 18 other states will have conducted their own caucuses and primaries. The timing of Missouri’s primary on the electoral calendar not only requires Missourians to be more patient than voters in neighboring Iowa, but also influences the conduct and results of the Missouri primary itself. A common refrain in political science is that “institutions influence outcomes,” and the ordering of elections in the presidential nominating process is no exception to that adage. Because Missouri and other states participate later in the nominating process, their elections differ systematically from those held in early-voting states in terms of voter behavior, candidate strategy, and political and economic rewards.

First, voters in Missouri and other states voting later in the nominating process use the results of the preceding caucuses and primaries to determine which candidate to support. While voters’ opinions of presidential candidates are largely informed by their perceptions of the candidates’ policy positions and personal characteristics, they are also shaped by their impressions of the candidates’ viability, or likelihood of winning the nomination. Voters in early states, such as Iowa and New Hampshire, must rely on political leaders, the media, and their own personal judgments to assess each candidate’s viability, whereas voters in later states also use candidates’ performance in previous contests to judge their viability and, in turn, make their vote choice. Using survey data from the 2008 presidential primary season in Washington state, which voted late in the nominating process, Collingwood, Barreto, and Donovan (2012) demonstrate that voters in that state who knew about Barack Obama’s success in Iowa and on Super Tuesday deemed him more viable and preferred him to Hillary Clinton. Early-state contests also shape elections in later states because candidates who fare poorly often drop out, reducing the pool of candidates from which voters choose (Norrander 2006). While some Missourians whose favorite candidate is no longer in the race on March 10 may switch their vote to another contender, others may instead decide not to vote at all (Atkeson and Maestas 2016). Thus, voters in Missouri and other later-voting states may cast different votes, or choose not to vote at all, than they would had they been able to vote earlier in the process.

Second, because candidates recognize the significance of succeeding in early nominating contests, they allocate more of their attention to states voting early in the process. Candidates’ incentives to focus on early-voting states stem not only from the importance of appearing viable to voters, but also from the role that early victories play in securing resources key to securing the party’s nomination, such as financial contributions (Christenson and Smidt 2011) and party leader endorsements (Whitby 2014). For example, Ridout and Rottinghaus (2008) show that candidates in the 2000 and 2004 presidential primaries aired more television ads in and made more trips to states whose elections took place shortly after the New Hampshire primary. According to the authors’ data, Democratic and Republican candidates in the 2000 primaries ran only 2% as many ads in and made only 3% as many visits to Missouri relative to New Hampshire. Since candidates are motivated to spend more time and money in early-voting states, voters in later-voting states such as Missouri have fewer opportunities to learn about and interact with those candidates.

Candidates’ incentives to focus on early-voting states stem not only from the importance of appearing viable to voters, but also from the role that early victories play in securing resources key to securing the party’s nomination, such as financial contributions and party leader endorsements.

Third, Missouri and other later-voting states are excluded from certain political and economic benefits enjoyed by early-voting states. When the general election ultimately concludes in November, one of the candidates who vied for their party’s nomination will win the White House, and in doing so will inherit sweeping executive power to allocate federal resources and services among the states. Taylor (2010) argues that presidents use this power to reward early-voting states that supported them in their party’s nominating contests; drawing on federal contracting data from 1984-2004, the author shows that more federal contracts are awarded to businesses in states that handed a victory to the sitting president in a primary or caucus, but only if that state holds its nominating contest early in the process. Differently, Lessem and Urban (2016) suggest that states benefit economically from hosting contested caucuses or primaries, as these contests generate additional spending in the accommodations and retail sectors by candidates’ campaigns and members of the media. However, because states only experience contested primaries if more than one candidate remains in the race when their elections take place, early-voting states are more likely to experience this windfall. Therefore, Missouri and other later-voting states often miss out on economic boons flowing from government or campaign spending due to their position on the electoral calendar.

When the general election ultimately concludes in November, one of the candidates who vied for their party’s nomination will win the White House, and in doing so will inherit sweeping executive power to allocate federal resources and services among the states.

In light of the disadvantages that Missouri and other later-voting states face in comparison to early-voting states, including voters’ diminished ability to express their preferences and participate in the nominating process, candidates’ lack of attention to their nominating contests, and states’ exclusion from election-related political and economic benefits, politicians, pundits, and scholars over the years have suggested reforming the presidential nomination process to put early- and late-voting states on a more equal footing. However, when considering alternative nomination mechanisms, it is important to remember that institutions influence outcomes, and, consequently, these alternatives may still privilege some states over others. For example, one popular alternative is a “national primary,” whereby all states would hold their nominating contests on the same day.  While this would remove any advantages states enjoy by nature of the ordering of their nominating contests, it would likely instead make larger states more attractive destinations for candidates because they could win more convention delegates with successful showings than they could in small states. Consequently, voters in larger states would enjoy more campaign activity and interaction with candidates and reap more of the political and economic benefits than smaller states—perpetuating disparities in the conduct and results of nominating contests across the states, albeit under a different institutional design.

David Ryan Miller is a PhD candidate in Political Science at Washington University in St. Louis.  His research focuses on American political institutions, with a focus on the presidency, organized interests, and legislative politics.  His dissertation, All the President’s Organized Interests, explores with which organized interests presidents engage, how presidents encourage interests to cooperate with their aims, and how presidents benefit from engaging with interests.

Norrander, Barbara. 2006. “The Attrition Game: Initial Resources, Initial Contests and the Exit of Candidates during the US Presidential Primary Season.” British Journal of Political Science, 36(3): 487-507.

Whitby, Kenny J. 2014. Strategic Decision-Making in Presidential Nominations: When and Why Party Elites Decide to Support a Candidate.  SUNY Press.