Williams Yamkam, assistant professor and Chair of the campus chapter of the American Democracy Project at  the University of Arkansas, is a guest contributor for the RAISE the Vote Campaign. The views expressed in the posts and articles featured in the RAISE the Vote campaign are those of the authors and contributors alone and do not represent the views of APSA.

“Politics is about who gets what, when, and how,” once said Hans Morgenthau.

“If you are not at the table, you will be on the menu.” U.S. Senator Mike Enzi is said to have popularized this statement on the importance of being engaged in the policymaking process.

If no citizen can afford to abstain from the political process without potentially facing negative consequences, and if it is the role of educators to equip students with the tools necessary to become efficacious and proactive citizens, it goes without saying that campuses must be ground zero for civic engagement activities that empower students. At the University of Arkansas – Fort Smith (UAFS), we have been more conscious of the necessary role that we must play in helping our students be successful not only in the classroom, but also as engaged citizens. Through a series of activities and events known as the ‘Lion Series,’ the UAFS chapter of the American Democracy Project has promoted civic engagement on campus in recent years.

Several years ago, as a standing member of the American Association of State Colleges and Universities (AASCU), the UAFS administration made the decision to have a chapter of AASCU’s American Democracy Project on the UAFS campus. Consequently, we devoted resources (e.g., an administrative and academic sponsorship from the chancellor and the provost, a budget, a student worker, etc.) to implement a series of initiatives that ultimately boosted civic engagement on the UAFS campus.

An executive committee brought together students, faculty, and staff to devise an actionable plan to make civic engagement part of experiential life on the UAFS campus. The plan used our mascot (a Lion) as an inspiration to establish eponymous civic engagement initiatives that our students can easily relate to. We launched the Political Lion series, the Policy Lion series, and the Civic Lion series, along with various town halls with political candidates, timely panel discussions, an election fair, an excursion to the halls of the various levels of government, and partnerships with community groups.

At the heart of the Lion series is the belief that if students are exposed to key public figures in a less formal setting, not only are those public figures more likely to open up about their experiences in public service, but so too are students more likely to learn from those public officials’ experiences. Hence, we arrived at the idea of hosting frequent town halls with public officials –giving students a significant role in the planning and execution of the events.

The Political Lion series is a platform for prominent political personalities such as the Speaker of the Arkansas House of Representatives, the Majority and Minority Leaders of the Arkansas Senate, and the Mayor of the city of Fort Smith to share their storied experience with our students.

Because these settings are less formal, students get to learn about the unofficial practical tools necessary to be successful in politics.

The Policy Lion series provides an opportunity for a prominent policymaker to explain the motivations behind the promotion of a given policy. For example, a prominent conservative lawmaker had successfully sponsored a controversial law that made it possible for trained individuals to carry concealed guns on campuses and at other public places throughout the state of Arkansas. Needless to say that the law was very unpopular on many Arkansas campuses, including on the UAFS campus. By having said lawmaker come and explain his rationale for introducing the controversial law, the Policy Lion program allowed our students to not only understand why the lawmaker felt the need to sponsor the controversial law, but also helped them to better understand the law. At the end of the town hall, most students still disagreed with the lawmaker, but had a newfound respect for his command of the facts and his common-sense approach to policymaking. 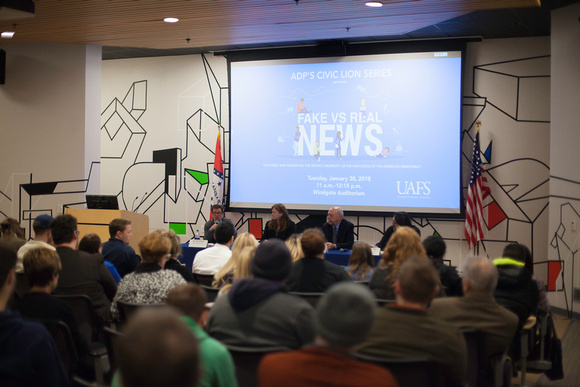 The Civic Lion series affords students a better understanding of some key timely civic issues that dominate the public sphere. For example, when the concept of fake news became part of the zeitgeist, we took the initiative to have a panel discussion made up of prominent Arkansas journalists from TV, radio, print, and digital media. This allowed students to not only have a better understanding of the concept of fake news, but also to understand the dynamic of the media’s coverage of politics.

In the last electoral cycle, we started the practice of hosting an election fair in which all of the candidates on the ballot are invited to mingle with our students. Additionally, we host student-moderated town halls with candidates running for various elective offices. Moreover, we partner with the local county clerk offices to host voter registration drives to get as many of our students as possible to register to vote. Since last year we have started hosting the State of the City Address during which the Mayor gives his yearly vision for the city. This was the first event of its kind in Fort Smith, Arkansas. Finally, we collaboratively host various events during Constitution Week and during Martin Luther King Jr. Week.

Recently, we were recognized as a Bronze Seal campus by the ALL-IN Campus Democracy Challenge for getting a 2.4% increase in the voting rate of our students from the 2014 midterm elections to the 2018 midterm elections.

Due to the progressive success of our events, the local media has made it a point to cover as many of our events as possible. This has helped convey our civic engagement message to a broader audience. The key focus for the UAFS American Democracy Project team is to ensure that our students do play a proactive role from the conception of our activities to their execution. This has led to significant engagement from our students as evidenced by the attendance at our events, social media conversations, a higher voter turnout, and the engagement of on-campus and off-campus stakeholders. Recently, we were recognized as a Bronze Seal campus by the ALL-IN Campus Democracy Challenge for getting a 2.4% increase in the voting rate of our students from the 2014 midterm elections to the 2018 midterm elections. We look forward to building on our positive momentum in boosting civic engagement on our campus.

Dr Williams Yamkam is an assistant professor of political science and the Chair of the campus chapter of the American Democracy Project at the University of Arkansas – Fort Smith (UAFS). Besides his academic duties, Dr. Yamkam oversees the campus wide initiative to boost civic engagement and political participation on the UAFS campus. He leads an executive committee team made up of students, faculty, and  staff who strive to devise and implement a campus wide civic engagement action plan. Under his leadership, civic engagement and political participation has spiked up on the UAFS campus. Thanks to Dr. Yamkam’s leadership, the ALL-IN Campus Democracy Challenge awarded UAFS a Bronze Seal for reaching a 2.4% increase in the voting rate among UAFS students from the 2014 midterm elections to the 2018 midterm elections. Dr. Yamkam is also a professionally-trained lobbyist and a professionally-trained campaign manager.