I’ve been asked to write about how chairs might best use their time over the summer.  This suggests you have free time (!). Still, most of us do have a moment when the email requests slow down, and you can take a look at the landscape of what you finished and what you might do to make things work better in the fall.

Most department chairs’ duties will depend on whether they have a campus that is decisive about fall COVID-19 arrangements. I do not have such a campus. Changes being made to the fall schedule don’t involve me now, but I will need to get involved later down the road. But if you do have a decisive campus, a great deal of that will be done already.

My main, and consistent, summer work has been around extending alumni outreach. By this, I mean making connections at the department level, even if your institution does a reasonable job keeping in touch with alumni. Especially at this juncture in American politics, making our current students aware of the paths former students are on is vital. Running for office doesn’t seem like a far-fetched plan. Acquiring data analysis skills can now lead places we never saw political science majors go. Social activism is now a necessity, not a nuisance.

I’ve developed a multi-pronged strategy for alumni outreach and after five years, I can see how much it is paying off. Here are the things that have worked for us:

Some departments can obtain lists of their alums quite readily from their institution. Others will find this surprisingly difficult. If you don’t have a list, the first thing I would do is create an alumni group on LinkedIn and a Facebook page. You will be surprised at how quickly alums will find you! LinkedIn also allows you to search for people who have degrees from your school and that list can be further refined by area of employment. Social media’s intrinsic beauty is the way it facilitates networking.

Once you have found these alums, what would you like to tell them? If you have an annual report or newsletter, send it to them. You’ll be surprised how interested they are in your department news. Next, explicitly invite them to send you any news about themselves or professional opportunities they may have for your current students. I have found the easiest way to make this work is to create a new email address for people to send this information. Then, student workers manage the inbox, forwarding good leads to relevant social media platforms.

I’m now in my sixth (and final) year of chairing, and I am now seeing the alumni outreach paying off. While we might have convinced a handful of alums to donate to the department, the biggest impact has been getting first dibs on good job openings and competitive internship programs. The next best effect has been finding mentors for our freshly graduated students. In one mentor match last year, the mentor moved on to another job and coached his mentee on how to get his current job (she landed it!). We’ve also benefitted from having our alums running for office reaching out to ask for interns. That’s a double win of seeing that they too could run for office while giving them a valuable internship experience.

You won’t get an immediate response from all of your alums at first. This takes time. But having places for them to find you helps immensely. Once you invest some effort this summer, you’ll get a trickle of requests to join your LinkedIn groups throughout the year.

All of us appreciated a class or professor years after we had them. We may have even disliked it at the time. Likewise, you will be surprised by some of the former students who respond most quickly. And then you’ll hopefully see alumni outreach as time well spent.

Robin Kolodny serves as Chair of the Department of Political Science at Temple University. Her research and teaching interests lie in campaigns, electoral systems, legislative studies, and comparative politics. She also writes extensively on political consultants and campaign finance in the US. Kolodny served as President of Pi Sigma Alpha, the national political science honor society from 2010 to 2012, was a 1995 APSA Congressional Fellow, and was named a Fulbright Distinguished Scholar to the UK in 2008-2009. 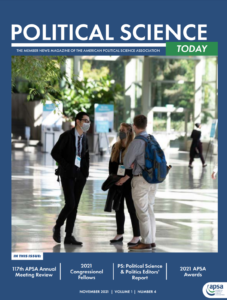